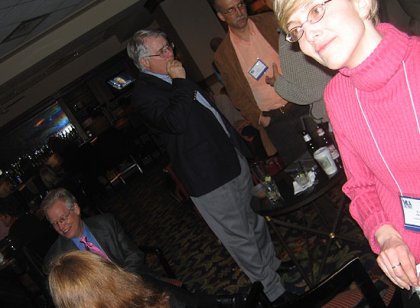 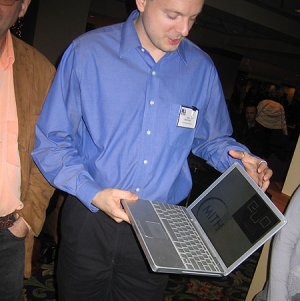 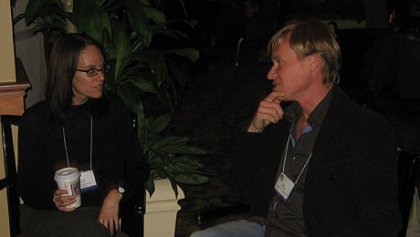 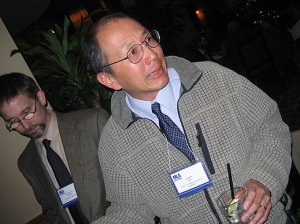 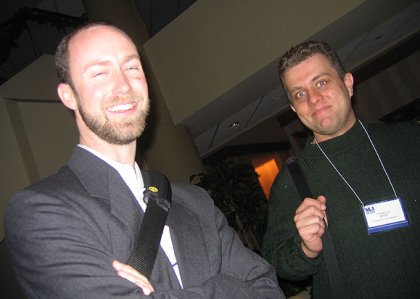 At today’s MLA event the Electronic Literature Organization and the Maryland Institute for Technology in the Humanities announced that we have agreed on the principles of a wide-ranging partnership. Plans in the works include research projects, conferences, and a move of the main ELO office to MITH in mid-2006 (while the UCLA ELO node will continue to organize its highly successful events). A joint press release will follow in the new year.

The Breakup Conversation is a satirical simulation of the conversation at the end of a romantic relationship. The player is expected to perform a breakup over instant messenger, while the computer, playing the role of the soon-to-be-ex, will attempt to guilt and emotionally manipulate the player to give in and fail to break up. The engine includes knowledge of numerous Ã¢â‚¬Å“guilt gamesÃ¢â‚¬Â that could take place during a breakup, and some ways of getting through them — for example, the Ã¢â‚¬Å“itÃ¢â‚¬â„¢s not you itÃ¢â‚¬â„¢s meÃ¢â‚¬Â ritual, the Ã¢â‚¬Å“why are you doing this to meÃ¢â‚¬Â blame, the refusals to discuss issues, and other ways in which people panic, reason, plead, lay guilt, and so on. These rituals are treated informally, and meant to be exaggerated and entertaining, rather than psychologically felicitous — they were inspired by sitcoms, personal anecdotes, and popular self-help books on relationships. The Breakup Conversation is a Windows executable program.

Adam Cadre’s “23,040 Bridges” provides a combinatoric explosion of different stories, asking the reader to rank how culpable each of five characters is in the death of the main character. Read and rank the characters; Cadre is collecting statistics now on how people assign guilt in the many different versions of the story. The statistics from readers’ judgments will be made available soon.

The successful candidate will be a member of WPIÃ¢â‚¬â„¢s Department of Humanities and Arts and will join the staff of the universityÃ¢â‚¬â„¢s Interactive Media and Game Development Program (IMGD) to develop courses and direct undergraduate projects.

Applicants with an MFA are encouraged; Ph.D. is preferred. Deadline is January 16, 2006. More information here: http://www.academiccareers.com/cgi-win/JobSite/sendjob.exe/ACO/?10921

Word Museum was created for the Brown University “Cave” — a room-sized virtual reality display. It asks how one can integrate writing into a scalable 3D space when it seems the scalability and 3D can only serve to render text illegible. Is it possible to write a poem that is readable from many angles, that remains legible even when animated, by using only letters that are still themselves if flipped over or turned upside down?

At the MLA convention in Washington D. C. this year, Nick Montfort and Alan Liu are gathering folks from the electronic literature, new media arts, digital humanities, text-encoding, and related circles for an impromptu happy hour: Thursday, Dec. 29th, 5 pm in the lobby bar of the Marriott Wardman Park hotel. (If it’s too crowded, the swarm may end up migrating) Good cheer and buzz; plus a surprise announcement relating to the Electronic Literature Organization.

Bobby Rabyd, a.k.a. Robert Arellano, details the “Summer of Hate” by relating intermixed stories of death in the San Franciso Bay area in 1969. Sunshine ’69 was the first Web novel. On its release, Robert Coover said, “no one has grasped the nature of this new thing called the ‘Net with more supple-minded alacrity than the writer Bobby Rabyd.” See the Directory entry for more information about this piece.

Agrippa (A Book of the Dead) appeared in 1992 as a collaboration between artist Dennis Ashbaugh, author William Gibson, and publisher Kevin Begos, Jr.

The Agrippa Files is a scholarly site that presents selected pages from the original art book (with the permission of the publisher); a unique archive of materials dating from the bookÃ¢â‚¬â„¢s creation and early reception; a simulation of what the bookÃ¢â‚¬â„¢s intended Ã¢â‚¬Å“fading imagesÃ¢â‚¬Â might have looked like; a video of the 1992 Ã¢â‚¬Å“transmissionÃ¢â‚¬Â of the work; a Ã¢â‚¬Å“virtual lightboxÃ¢â‚¬Â for comparing and studying pages from the book; commentary by the bookÃ¢â‚¬â„¢s publisher and scholars; an annotated bibliography of scholarship, press coverage, interviews, and other material; a detailed bibliographic description of the book; and a discussion forum. END_OF_DOCUMENT_TOKEN_TO_BE_REPLACED

There’s just one week left to apply for Brown University’s yearly graduate fellowship for electronic writing, the first ever offered in the U.S. (deadline December 15th). It comes with two years of support, three workshops with world-class writers, four other courses at Brown of your choice, and a nice MFA at the end. Last year’s graduate was William Gillespie, and the year before’s was Talan Memmott.