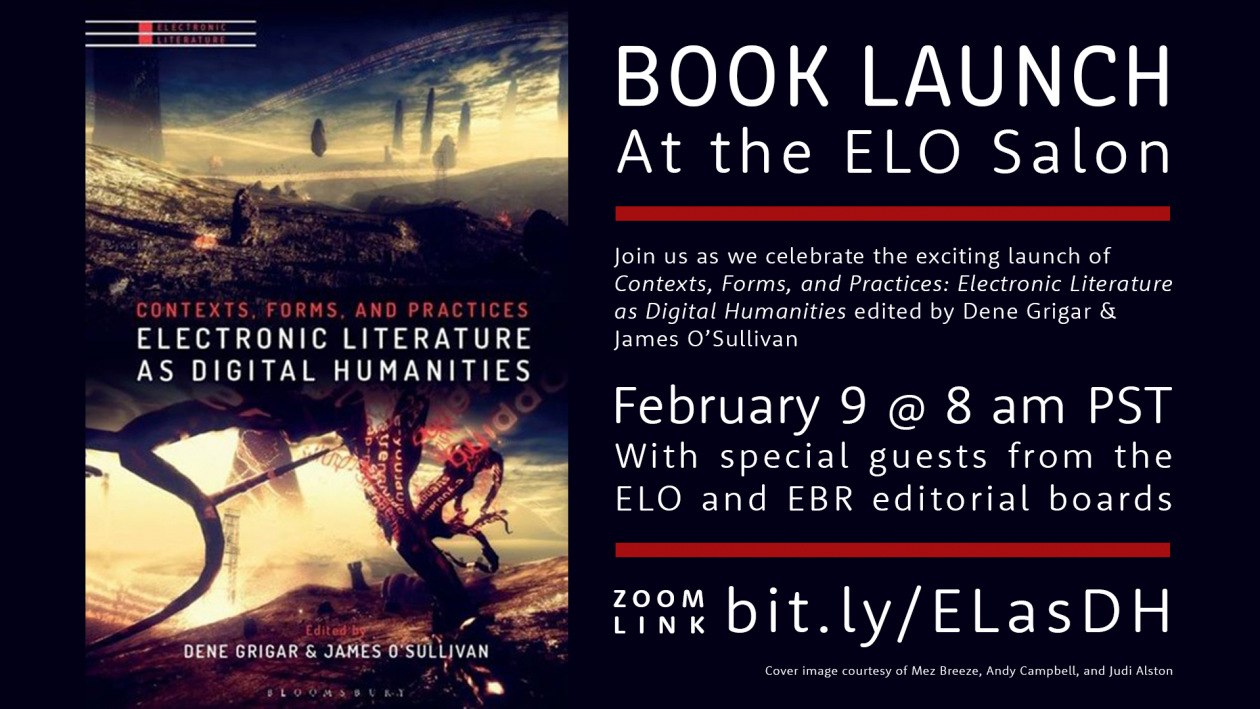 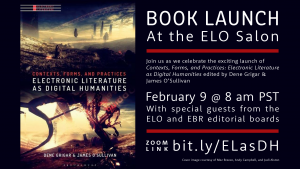 Join us as we celebrate the exciting launch on Feb 9 at 11am EST (1600 GMT) with special guests from the ELO and Electronic Book Review editorial boards.

Join us via Zoom!

The U.S. National Endowment for the Humanities has awarded the Electronic Literature Organization a Digital Humanities Start-Up Grant amounting to $52,003 for an innovative historical effort involving the first generation of modern digital writing.

The Pathfinders project, proposed by ELO President-elect Dene Grigar of Washington State University Vancouver, and Board Member Stuart Moulthrop of the University of Wisconsin-Milwaukee, will build an archive of readings in which the authors and volunteer readers explore the textual possibilities of early digital texts.Â  Readings will be carried out on the early computer systems for which the works were originally intended.

Recorded sessions will be made available through the Electronic Literature Database, and will also form the basis for multimedia presentations developed by the investigators and other colleagues.Â  Using innovative software such as Scalar, these publications will explore strategies for representing and preserving computer-mediated writing.

Among the works chosen for the project are Judy Malloy’s Uncle Roger: The Blue Notebook (1986), John McDaid’s Uncle Buddy’s Phantom Funhouse (1994), and Shelley Jackson’s Patchwork Girl (1995).Â  Plans are underway to expand to other key titles from the 1980s and 90s.

Sponsored by the Electronic Literature Organization, the research will take place in the E-Lit Laboratory of Washington State University, Vancouver.Â  The project begins in the spring of 2013 and will conclude in late 2015.

Members should remember that ELO can be used as a sponsoring organization on many different kinds of grants.Â  Contact us for more information. 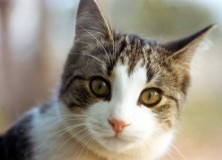 Members of the Electronic Literature Organization no doubt remember the first time they heard about electronic literature. That exhilarating moment wrapped around a sense of possibility and a desire to get their hands on either the tools of creation or the mind-blowing creations or both. Over the past month, the popular science journal New Scientist has been publishing posts marking its discovery of electronic literature in a series called Storytelling 2.0.

The posts mention ELO and ELO co-founder Robert Coover along with works by Jay Bushman and others. There’s even a mention of ELO-President Nick Montfort, alluding to his work on his IF platform Curveship.

Check out the posts and join the conversation as New Scientist readers discover e-lit.

Announcing Stephanie Strickland’s new book of poems, ZONE : ZERO, which includes a CD with two sequences from the book as interactive digital poems.

Here you will find sample poems, reviews, and recorded readings, along with endorsements from Marjorie Perloff, Rachel Loden, and Brian Kim Stefans,

Stephanie has contributed immeasurably to the production and promotion of electronic literature through her work as a poet, as a critic and theorist, and most recently as a co-editor of the Electronic Literature Collection, Vol. I.

The Chronicle of Higher Education has devoted three pieces to the ELO/MITH Open Mic & Mouse event that was held as a kick-off to the Electronic Literature Symposium that was held at the University of Maryland in early May.

Click here for an article covering the event. Below the lead picture, you’ll find a link to the video story. And, on the right-hand side of the screen, under “Related Material,” you’ll see a link for an audio interview with N. Katherine Hayles.

The Electronic Literature Collection, volume one is the topic of Katie Haegele’s column in the Philadelphia Inquirer this week. She writes:

But wouldn’t it be nice to get our arms around this thing, to get a sense of the full breadth and scope of what’s called digital literature?

The 60 works in the first volume of the Electronic Literature Collection (ELC) (http://collection.eliterature.org) – edited by N. Katherine Hayles, Nick Montfort, Scott Rettberg and Stephanie Strickland – show the wide range of forms that exist within the genre.

The column describes the keyword index and discusses four of the pieces included in volume one of the Collection in detail.

The Electronic Literature Organization (ELO) has now established its new headquarters at The Maryland Institute for Technology in the Humanities (MITH) at the University of Maryland, College Park. The move, which has been made possible by sponsorship from MITH, the English department at Maryland, the College of Arts and Humanities, and the University Libraries, was completed this summer.

Neil Fraistat, director of MITH, said of the move: “In moving from UCLA to the University of Maryland, the ELO will provide MITH with a unique opportunity for a truly comprehensive program in the Digital Humanities, one that focuses equally on migrating electronically the cultural artifacts of the past and the production of the cultural artifacts of the future.” Thom Swiss, president of the ELO, added: “The Maryland Institute for Technology in the Humanities (MITH) at the University of Maryland, College Park, is internationally known and, together with the support of its campus partners in this venture, makes for the best possible home for the ELO because of our similar and now collaborative interests and ambitions.”

Founded in 1999 in Chicago, the ELO is a 501(c)(3) nonprofit organization made up of writers, scholars, educators, and technologists dedicated to exploring how computers can be used for literary expression, and how born digital work can use the computer and the network to build on and extend the tradition of literature. Landmark events in the ELO’s short history include:

* The launch of the Electronic Literature Directory, an acclaimed
database-driven resource of information about electronic literature
maintained by authors and visited by thousands of readers;

* The Electronic Literature Awards, which recognized exemplary works
of poetry and fiction and rewarded winners with substantial cash
prizes;

* The State of the Arts Symposium, which united over one hundred
international writers, scholars, and publishers of electronic
literature at UCLA for two days of panels and presentations and
produced hard-copy proceedings; and

The ELO has an international network of directors, literary advisors,
and members. The organization’s university partners include the
University of Iowa, the University of Illinois Chicago, and the
University of Pennsylvania. After the headquarters of the ELO moves to
Maryland, partnerships with these universities, and the partnership
with UCLA, will continue, as will electronic literature readings,
events, and activities across the country.

The partnership between MITH and the ELO will help both organizations
pursue their related missions. The ELO will work, with MITH’s help, to
further its programs and its impact, both internationally and on the
Maryland campus.

Read a brief article in the San Antonio Express-News about Robert Coover’s recent presentation at Our Lady of the Lake University’s first city-wide literary festival. Coover’s overview of the elit medium included a look at the ELO’s website and its definition of the field.

Scott Rettberg was recently interviewed by the Chicago Tribune’s cultural critic, Julia Keller, for an article entitled “Plugged-In Proust: Has E-Lit Come of Age?” William J. Mitchell, head of the Media Arts and Sciences program at the Massachusetts Institute of Technology, was also interviewed for the piece, which examines the relationship between control and reading technologies.