“Avenues of Access: An Exhibit & Online Archive of New ‘Born Digital’ Literature” is a media art exhibit held in conjunction with the MLA 2013 Convention, featuring new works of electronic literature by 33 artists from the U.S., Canada, UK, France, Portugal, Australia, and Germany.  It is curated by Drs. Dene Grigar and Kathi Inman Berens.

The exhibit is located in Room 312 in the Hynes Veterans Memorial Convention Center. Exhibit hours are:

The exhibit closes on Saturday evening and will not be open on Sunday. Assisting at the exhibit as docents will be six undergraduates from Washington State University Vancouver’s Creative Media & Digital Culture Program.

The Electronic Literature Organization (https://eliterature.org), the leading organization devoted to electronic literature, announces its 2013 conference to be held in Paris, France, September 24-27, 2013. The conference is hosted by the Laboratoire Paragraphe and the EnsAD (Ecole nationale supérieure des Arts Décoratifs). Along with the conference organizers and hosts, other partners include: Université Paris 8, Laboratoire Transferts critiques et dynamiques des savoirs, Bibliothèque Nationale de France (BNF), and Le Cube. The official languages of the conference will be French and English.

Proposals are welcome on topics within electronic literature, including but not limited to:

The conference title is “Chercher le Texte: Locating the Text in Electronic Literature.” Electronic literature is explicitly defined as literature. Yet there is great confusion about the concept of text at work in it. What defines the textuality of games, visual works, and works without any evident language? The ELO 2013 conference in Paris will confront such issues: to seek out the text and attempt to define the literariness of electronic literature.

Over the past two decades, while numerous creative and critical movements have taken hold within and without academia, creators have been newly conceiving, and scholars resituating, literary works in new media. Early warnings that we might all get “lost in hyperspace” were overcome fairly easily – perhaps too easily when one considers that our first, most challenging conceptions of electronic writing have never quite been realized. Is there a way to mark the multiplicity of new writing in new media? Can commonalities and distinctions among emerging literary practices be noted? Are there new possibilities for language-based forms in programmable media? Can scholarly discussions surrounding works be carried on over time and among various groups, in the media where the works are generated?

ELO 2013 seeks to open the discussion beyond the remediation of literary writing from print to screens, by looking at ways that literary works, and “literariness” generally, circulates through a world system that has itself altered dramatically in the years since the first works of e-lit were produced. New media, from this perspective, are just the most visible instance of emerging economic, social systems, remediations, and subjectivities that impact literary production (as they impact our lives) from every side. New media are now being described, and re-imagined, in terms of new materialisms; discourse networks find new and different alignments within and without institutions, and both human agency and authorial presence have taken on new and sometimes strange forms.

The Electronic Literature Organization and Université Paris 8 invite individual paper proposals, panel proposals, and proposals for alternative formats. Submit abstracts of 200-500 words to Easychair at https://www.easychair.org/conferences/?conf=elo2013. Send questions to Joseph Tabbi <jtabbi at gmail.com> or Philippe Bootz <philippe.bootz at univ-paris8.fr>. A separate call for creative works will be issued shortly.

This week Edinburgh College of Art in collaboration with New Media Scotland and University College Falmouth will host the conference “Remediating the Social” (Nov. 1-3) under the ELMCIP framework.  ELMCIP is a partner of ELO in the Consortium for Electronic Literature (CEL) and has become through its Knowledge Base one of the main sources for information on e-lit in Europe (and beyond).

ELMCIP, or Electronic Literature as a Model of Creativity and Innovation in Practice, is a three-year collaborative research project that began in June 2010, which focuses on how creative communities of practitioners form with a transnational and transcultural context, with an implicit emphasis on electronic literature.  ELMCIP’s project leader is ELO co-founder Scott Rettberg, who together with seven other partners make up the principle investigative team.  See his conference presentation on ELMCIP here.

Everyone can watch the live conference stream here.
The conference proceedings, including full-text of papers, is available for download here.

During the conference, ELMCIP will also be featuring the publication of the ELMCIP Anthology of European Electronic Literature.  See the contents list here.

Gallery of Works:
Below you will find the list of works on display at the galleries during the conference and in the two weeks following.

J. R. Carpenter | The Broadside of a Yarn

ELMCIP is supported by the HERA Joint Research Programme (www.heranet.info) which is co-funded by AHRC, AKA, DASTI, ETF, FNR, FWF, HAZU, IRCHSS, MHEST, NWO, RANNIS, RCN, VR and The European Commission FP7 2007-2013, under the Socio-economic Sciences and Humanities programme.

This Saturday, at the Society for Literature, Science, and the Arts conference in Milwaukee, ELO is sponsoring a reading entitled, “Electronic Literature & the Nonhuman,” featuring performances from an exciting mix of artists and works, from ARGs to single-line programs.

The presenters for the electronic literature reading at the SLSA conference include:

The jury for this reading were Sandy Baldwin, Davin Heckman, and Jessica Pressman.  The evening will be hosted by Mark C. Marino and Stuart Moulthrop.

Please join us for this event in room 201C of the Frontier Airlines Center.

The Electronic Literature as a Model of Creativity and Innovation in Practice (ELMCIP) research project invites scholars, artists, researchers and performers to the conference, Remediating the Social, held in Edinburgh, November 1-3, 2012.

Remediating the Social is hosted by Edinburgh College of Art in collaboration with New Media Scotland and University College Falmouth within the framework of the ELMCIP research project. The event is held at Inspace, a purpose-built research and exhibition facility at the University of Edinburgh, fully instrumented to facilitate engagement with developments in new technologies, scientific research and creative practice. The exhibition will continue after the conference for three weeks.

The conference programme consists of expert presentations, across a range of disciplines and modes of inquiry, addressing examples of creative communities that have formed around various practices, media and discourses. Case studies, papers and panels, discussing examples arising from the ELMCIP project and other contexts will be presented. The conference will be e-cast, allowing for remote attendees to freely monitor events and put questions to conference via Twitter. Conference proceedings, with a full colour catalogue of commissioned art works, will be published prior to the event.

ELMCIP is supported by the HERA Joint Research Programme (www.heranet.info) which is co-funded by AHRC, AKA, DASTI, ETF, FNR, FWF, HAZU, IRCHSS, MHEST, NWO, RANNIS, RCN, VR and The European Commission FP7 2007-2013, under the Socio-economic Sciences and Humanities programme.

Literature in the first part of the 21st Century continues to undergo a revolution.   Whether playing to the new aesthetic or re-imagining the literary tradition, emerging works are responding to and shaping the changing nature of reading.

Performances are limited to 10 minutes.

Submit 250-300-word description and links to elitSLSA12@gmail.com (Subject: Submission).  Descriptions should emphasize the performative nature of the presentation. Proposals should include the title and a short description of the work (including any links to your material), a plan for presentation, technology requirements, and a short (50 words) bio for each participant. Available technology will be audio, projector, and wifi.

Deadline: Sept. 1, 2012
Note: All participants must register for the SLSA conference and must be in attendance at the reading.  No remote presentations will be accepted.

Following the wildly successful conference in Morgantown, ELO announces the addition of 2 new members to each of its boards. This year, Jessica Pressman and Davin Heckman join the Board of Directors, and Erik Loyer and Chris Funkhouser join the Literary Advisory Board.

These world class artists and scholars bring terabytes of talent to the organization. Having published extensively critically and creatively, the four have helped the field to expand and mature, spreading knowledge of e-lit around the globe.

All four scholars and artists have had long standing relationships with ELO. When ELO was in its early years, Jessica Pressman was the first person to serve in what is now the Managing Director position. Davin Heckman manages the Electronic Literature Directory. Both Chris and Erik have been actively involved in the ELO community, developing artistic and scholarly works that have advanced the field. (Read the complete bios below.)

In addition to adding new members, the Board meeting in Morgantown also featured a switch in Vice Presidents as Scott Rettberg completed his term and Talan Memmott was elected to replace him.  Carolyn Guertin was appointed to the newly created position of Director of Publications.

At the start of the meeting, Alexandra Saemmer from Paris 8 lab presented more information about ELO 13, an interim year conference in the planning for France.  More details on this first European ELO conference to follow.

At the end of the meeting, the current Board Members renewed their commitments, and all congratulated Sandy Baldwin, Dene Grigar, and the rest of the organizing committee on a tremendously successful conference.

END_OF_DOCUMENT_TOKEN_TO_BE_REPLACED

The opening event of “Electrifying Literature” conference is on Tuesday, June 19 at 7pm, after the pre-conference workshops. As mentioned in emails from local organizer Sandy Baldwin, this is an open mic, following in the tradition of open mic/open mouse events at UCLA, the University of Maryland, and MIT.

Sandy encourages all to participate, saying, “I love these sorts of readings (even when they aren’t entirely of e-lit) and am planning to present at least a short piece myself. Please sign up and present, if you’re coming with work of yours to Morgantown. I hope to see, and hear, you there.”

On Thursday at ELO12, Leonardo Flores, Giovanna DiRosario, Mark Marino will present with Jim Andrews on his work of visual poetry, Aleph Null. 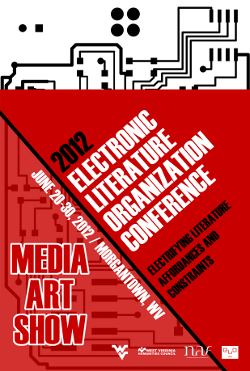 ELO’s 2012 conference is fast approaching, and the schedule of readings and performances is now available online.  The conference, Electrifying Literature: Affordances and Constraints will be held June 20-23 in Morgantown, West Virginia, home to WVU, a sponsor of the event.  Pre-conference events on the 19th include and open mic/open mouse.

In addition from presentations from an international gathering of digital literature artists and scholars, the event also features a Media Arts Show, which presents an exciting collection of new works.  This juried gallery was curated by Sandy Baldwin and Dene Grigar and features cutting-edge works in digital literature.