A continuation of our weekly Summer eReading series, highlighting new works of e-lit and scholarship. 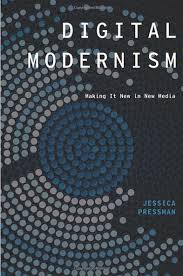 A certain self-referentiality and playful experimentation in works of electronic literature has won it the affection of those with an appetite for the Post-Modern.Â  But in Jessica Pressman‘s new book, she situates these literary works in a category she calls “Digital Modernism.”Â  Throughout the monograph, Pressman performs detailed interpretations of Young-hae Chang Heavy Industries’ Dakota and William Poundstone’s Project for Tachistoscope {Bottomless Pit}, and other works of digital literature in the context of print-based, canonical Modernist texts such as Ezra Pound’s Cantos.Â  In what Rita Raley calls “wonderfully elegant close readings,” Pressman demonstrates how critical reading practices evolve with developments in technologies.

In the midst of these close readings,Â  Pressman presents her exploration of the media archaeology of older forms of “new media,” epitomized by her analysis of Bob Brown’s Readies, in which she sees anticipation of the fast-flashing words that flicker through so much electronic literature.

Jessica Pressman is currently serving on the Board of Directors of ELO, but has a much longer history of service with the organization, beginning with its time at UCLA.Â  She will be presenting her recent research at the upcoming ELO 2014 conference in Milwaukee.

Grounding her argument in literary history, media studies, and the practice of close-reading, Jessica Pressman pairs modernist works by Ezra Pound, James Joyce, and Bob Brown, with major digital works like William Poundstoneâ€™s Project for the Tachistoscope {Bottomless Pit}, Young-hae Chang Heavy Industriesâ€™s Dakota, and Judd Morrisseyâ€™s The Jewâ€™s Daughter. She demonstrates how the modernist movement of the 1920s and 1930s laid the groundwork for the innovations of electronic literature. Accordingly, Digital Modernism makes the case for considering these digital creations as â€œliteratureâ€ and argues for the value of reading them carefully, closely, and within literary history. Moreover, this remarkable study details how and why one of the most maligned of literary spaces, the web â€” one accused of fostering reading habits that destroy deep attention and devalue hermeneutic analysis â€” is actually the place where serious literature stages its rebellion and renaissance. Even more importantly, perhaps, this book argues for the importance of literature, literary study, and close reading in our digital age.