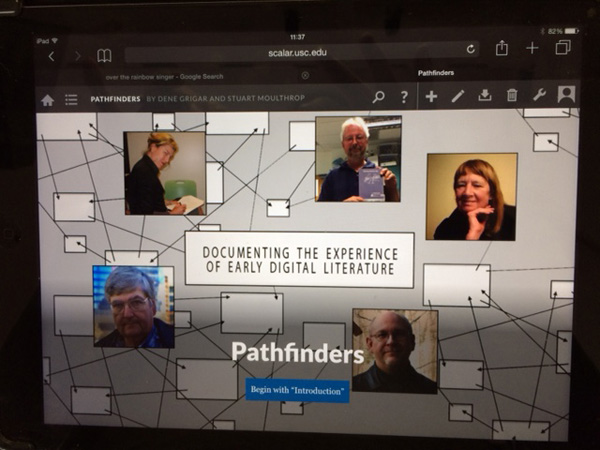 ELO President Dene Grigar and Board Member Stuart Moulthrop are releasing a new free online book entitled Pathfinders, which features resources about foundational works of early electronic literature from some of the biggest names in the field. Â This is a vast resource for anyone wishing to study electronic literature or include it in their courses. Â Below is their full announcement.

In the decade between 1985 and 1995, as personal computers grew familiar and the Internet became a presence in everyday life, assumptions about reading, writing, and text began to change. Digital tools allowed increasingly powerful combinations of media. The ancestors of blogs and social networks appeared.Â  Experimental writers began to use tools like hypertext as the basis for fiction and poetry.

In the face of all these changes, the idea of the book remained essential in understanding the new nature of writing.Â  Yet the book could no longer be limited to traditional forms.Â  To understand the early history of electronic writing we would need a new kind of book; but what would it be like? Â How would it capture the interactivity the effort now required of readers? How would it reflect the graphics, movement, and sound that that had become important narrative strategies? How would such a reinvented book make accessible works meant to run on an Apple IIe or early Macintosh computer, in these days of tablets and smart phones?

Pathfinders: Documenting the Experience of Early Digital Literature, by Dene Grigar and Stuart Moulthrop, answers these questions in the form of a multimedia, open-source web-book created for a wide array of digital devices. It features 173 screens of content, 53,857 words of text, 104 videos, 203 color photos, and various audio files, providing readers with access to four important computer-based works of literature that were among the first to be sold commercially in the U.S. — but are now seriously threatened by obsolescence.

The book, whose production was funded by a grant from the National Endowment for the Humanities, will be released June 1, 2015 and made available free of charge through the open-source platform Scalar, created by the Alliance for Networking Visual Culture at the University of Southern California.

Using video and still photography, Pathfinders captures demonstrations of four groundbreaking works, performed by their authors on vintage systems.Â  Readers accessing the book will watch Judy Malloy walk through her database novel Uncle Roger, originally published on the Whole Earth â€˜Lectronic Link and considered by some the first example of social-media literature.Â  They will also see a tour of Uncle Buddyâ€™s Phantom Funhouse, a revolutionary hypermedia novel-in-a-box by John McDaid, and a demonstration of two classics in the early hypertext system Storyspace, Shelley Jacksonâ€™s Patchwork Girl and William Blyâ€™s We Descend.Â  Extensive interviews with all four authors add an important dimension of oral history to the project.

Pathfinders was created by Dene Grigar, Professor and Director of the Creative Media & Digital Culture Program at Washington State University Vancouver, and Stuart Moulthrop, Professor of English at the University of Wisconsin-Milwaukee.Â  Demonstrations and research took place in the Electronic Literature Lab (ELL), a working collection of electronic literature and vintage computers dating from1983 assembled and directed by Grigar. The designer of the Pathfinders book is Will Luers, faculty member in the CMDC Program. Madeleine Brookman, a junior in the CMDC Program, served as the Research Assistant to the project.

The formal book launch party is scheduled for Friday, June 5, at 6:30 p.m. at Nouspace-Angst Gallery, located at 1015 Main Street, Vancouver, WA. The works of these authors will be displayed on vintage computers and copies of the book will be on view to the public. For more information, contact Dr. Dene Grigar, dgrigar at wsu.edu.

The book will be available at http://scalar.usc.edu/works/pathfinders.