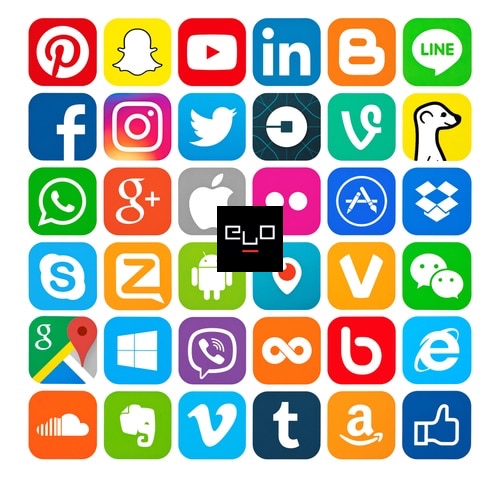 The electronic literature community has developed many online publications (‘zines and similar resources) that feature Web-based technologies and have typically taken the form of websites. The ELO seeks to encourage the creation of new spaces (‘zines) in which to curate, promote, and explore a greatly expanded set of works on popular social media spaces online. These might include video sharing sites, mobile platforms, or social media networks. The goal of our initiative is to stimulate and support the creation and dissemination of quality electronic literature in a much greater variety of locations.

We are looking for proposals to create new recurrent publication spaces that:

Interested? Send us a 500 word proposal that addresses all the points above by November 1, 2020. If you have any questions or seek additional guidance, please contact ELO President Leonardo Flores (leo@eliterature.org).

The ELO is prepared to fund one or more proposals in 2020-21, which will receive up to $1,000 in startup funds to cover licensing and developer fees, graphic design, software infrastructure, marketing, programming, etc. We can also help the team(s) with recruiting efforts, disseminating calls, and promoting it through our communication channels.

The winning team(s) will run the publication and prepare a report in which it shares its plans and processes, successes, lessons learned, and other insights from creating and running the publication. This report is to be presented in the ELO 2022 Conference.

ELO Board members are not eligible to apply to this initiative.

We are pleased to announce the 2020 ELO Prize winners.

The Robert Coover Award for a Work of Electronic Literature

The Robert Coover Award for a Work of Electronic Literature honors the year’s best work of electronic literature, of any form or genre. It comes with a $1000 stipend.  The Winner of the 2020 Award is The Library of Nonhuman Books by Karen Ann Donnachie & Andy Simionato

According to the judges: “With The Library of Nonhuman Books, Karen Ann Donnachie & Andy Simionato have produced a work that is perhaps best defined as multiple. Rather than a stand alone work of electronic literature, what we have here is a system that touches upon machine reading, the algorithmic manipulation of text, and authorship.  The “work” in this regard is in the production of a complex set of operations capable of producing endless texts. Though, the end result may in fact be a physical book, what is most interesting from an electronic literature perspective is the potential for a literary practice dominated by the machine.”

According to the judges, “Déprise by Serge Bouchardon and Vincent Volckaert is an intelligent and literary sophisticated interactive narrative that has contributed to spread elit around the world. Published in French in 2010, it has been translated in ten languages. Déprise is one of the many digital works that has experienced the obsolescence of programming software. However, Bouchardon migrated the text (and four translations) written in Flash into JavaScript to save his work.”

The N. Katherine Hayles Award for Criticism of Electronic Literature

Critical Code Studies is an important and necessary book, staging an instructive, provocative, and creative interruption into the field of computer science and related creative projects.  Challenging fundamental assumptions and habits of critical practice, it argues for the political and cultural necessity of becoming critically lucid about this invisibilized layer of meaning, materiality, and process that is at the heart of every experience of electronic literature. Understanding code for its linguistic capacity and meaning-making flexibility, as a subtle layer of signs that communicate essential socio-political contexts, this book’s varied case studies are instrumental in unfolding the complexity and richness of CCS’ interventional possibility.

Adventure Games is a collaborative work that mixes history, theory, close readings, and larger implications in a comprehensive analysis of the thoroughly e-literary genre of adventure games, braiding electronic literature into broader and more inclusive critical conversations.  Reaching out to audiences beyond academia, this volume identifies and counters marginalization and othering aspects of particular interactive experiences via a radical inclusion, collectively considering design elements, mechanics, and dynamics; choice and episodic structures; innovation in story, puzzle & exploration; walking simulators and the representation of space;  character and conversation focused games and queer modalities of play; and emerging technologies of perception and play.

The Marjorie C. Luesebrink Career Achievement Award honors a visionary artist and/or scholar who has brought excellence to the field of electronic literature and has inspired others to help create and build the field. Bestowed by the Electronic Literature Organization and funded through a generous donation, it comes with the following: a $1000 award that can go directly to the awardee or to a young scholar who would use the funds in support of developing content for online resources about the awardee’s achievements; a plaque showing the name of the winner and an acknowledgement of the achievement; and a one-year membership in the Electronic Literature Organization at the Associate Level.

We are delighted to announce this year’s winner of the Marjorie C. Luesebrink Career Achievement Award, pioneer in digital writing  Judy Malloy.

The judges offered the following celebration of Judy Malloy:

For the duration, breadth, and perhaps above all the constancy of her contributions to the field of electronic literature, we select Judy Malloy for the Marjorie C. Luesebrink Career Achievement Award. Since Uncle Roger, Its Name Was Penelope, and other pioneering works of first-generation e-lit, Judy Malloy has presented a striking and original body of creative work, programming, and scholarship in the field of electronic literature. Throughout her career she has written poems, narratives and essays that explore who we are, where we come from, and our relationship with others and technology. Her visionary creative and critical work as well as her teaching have inspired many. She has done all of this without benefit of a permanent academic appointment.

Malloy has been a particularly strong advocate for women in the field, as evidenced by her 2003 MIT Press volume on Women, Art, and Technology, one of the first of its kind. Like her later volume on Social Media Poetics, it is a “sourcebook,” collecting the writings of others for documentation and dissemination. That she has continued preserving her own earliest work, updating it for the Web and new platforms, speaks to her ongoing interest in reaching an audience; as does her long-running Writer’s Notebook on the WELL, a kind of blog avant la lettre. For all of these reasons, Judy Malloy is our unanimous choice.

ELO awards these prizes at its annual conference. The call for next year’s awards will be issued months before via ELO’s website.

A PDF of the press release is available here.

Given the uncertainty surrounding the Covid-19 pandemic the ELO wishes to protect its community by planning its 2021 conference as an online conference and festival. We recognize the importance of maintaining the tradition of an event that brings together scholars, artists, and people interested in digital language arts from around the world. This year, we had to pivot from a traditional conference to an online, virtual one, and are grateful for Anastasia Salter and her team’s resiliency.

Interested parties should contact the ELO President, Leonardo Flores (leo@eliterature.org), for guidance on developing a proposal for the conference. We encourage sending a pre-proposal no later than August 31, 2020 to help develop it into a full proposal. The deadline for complete proposals is September 30, 2020. The Board of Directors will consider proposals and make a decision shortly thereafter.

Next year, we will reassess the state of the Covid-19 pandemic and decide if we continue with online conferences or return to a face-to-face modality in 2022. Those interested in hosting the 2022 conference (be it online or face-to-face) should also contact Leonardo Flores to discuss options.

Here’s a link to a downloadable PDF of the Call for Proposals.

As we prepare to launch this year’s online conference, we would like to invite our community to support the ELO with their 2020 membership dues ($50 regular membership, $25 for unaffiliated scholars, independent artists, and students).

Take a look at all the amazing content in this year’s conference:

The content of the conference is free and open access. Even if you don’t register, you’ll be able to access talks, papers, and EVENTUALLY the recorded Zoom sessions. To participate in or access the Live Program, you will need to be a member of the organization and register for the conference.

The Electronic Literature Organization is committed to free and open access to all the resources and collections it creates, year round. And the way you can support these initiatives and publications is by renewing your membership dues every year.

For your convenience, here’s the Live Events Calendar in a Google Calendar. 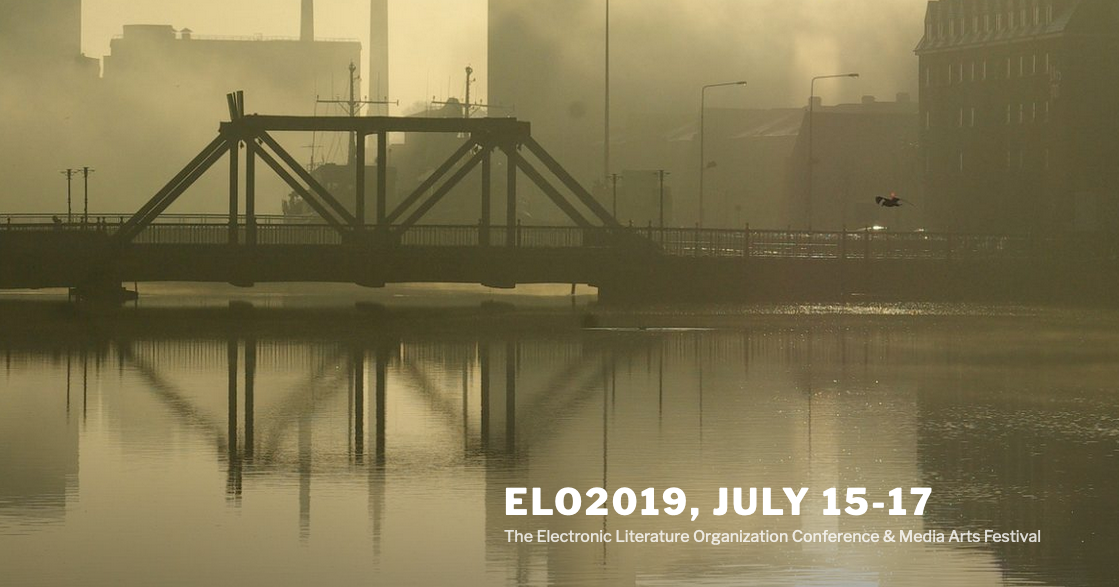 The ELO Board of Directors– and our conference organizers– are interested in offering the most rewarding conference experiences to its community. In order to continue improving in this mission, your feedback is essential. Please take a moment to provide feedback on the 2019 ELO Conference in Cork (if you attended) and/or on previous ELO conferences. This survey will also allow you to make suggestions for future ELO conferences and events.

This anonymous survey will allow you to be as brief or as thorough as you like. We appreciate and value your feedback!