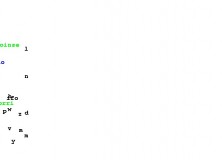 Judy Malloy’s “Interlude” is part of a longer work entitled Dorothy and Sid. This story focuses on the lives of contemporary artists in the San Francisco Bay area; it unfolds in four parts: “Dorothy Abrona McCrae”; “Interlude — Dorothy and Sid”; “A Party at Silver Beach”; and “Afterwards.” Each of these narratives is characterized by multilinear story segments that can be accessed by the reader in varying order. “Dorothy Abrona McCrae” was begun as an online serial in April 2000. A new installment was added each month. The final installment was posted in December 2000. In “Interlude — Dorothy and Sid,” in a series of trips and intimate moments, Dorothy and Sid change their long-term but occasional relationship into a more serious commitment.