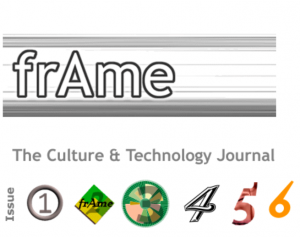 Announcing the restoration of frAme: Online Journal of Culture & Technology, published by the trAce Online Writing Centre from 1995-2005, has been reconstituted and available to the public thanks to the Electronic Literature Organization (ELO, eliterature.org).

â€œThe journal represents an important cultural artifact that speaks to a time in which writers and artists were experimenting with the electronic medium and produced works that challenged traditional publication methods,â€ according to Dene Grigar, ELO President and Director of the Electronic Literature Lab.

â€œfrAme heralded a time in which scholars and artists were transcending space and time to publish freely to the unknown audience of the, then, new World Wide Web, breaking down international borders and defying print conventions,â€ said Grigar.

In the brief timeÂ frAmeÂ was published, web-based practices themselves changed rapidly, from how files were named to how information was coded. Besides providing insights into digital literary art and scholarship of the late 20th Century,Â frAmeÂ points to the changes afoot in publishing and in the communication networks linking people and ideas

Grigar added, â€œfrAme represents the artistic and scholarly vision of a pioneering community whose influence can be felt beyond its base in Nottingham, UK. The artists and writers found in the archives hail from many countries and reflect a global perspective that the trAce Online Writing Centre sought to nurture and share.â€

ELOâ€™s future plans include resurrecting the five special issues of frAme, published from March 20, 2003-November 25, 2004, as well as the trAce site, which hosted forums, competitions, online courses, and other events and activities, and personal archives donated to ELO by trAceâ€™s founder, Sue Thomas.

The site can be found at https://elo-repository.org/trace/.

The Electronic Literature Organization, or ELO, is A 501(c)(3) nonÂ­profit organization composed of an international community that includes writers, artists, teachers, scholars, and developers. The Organization’s focus is new literary forms that are made to be read on digital systems, including smartphones, Web browsers, and networked computers. ELO is an international organization of artists and scholars, currently based at Washington State University-Vancouver.

Announcing a new partnership ofÂ electronic book review (ebr)Â (www.electronicbookreview.com)Â and the Electronic Literature Organization (ELO) (www.eliterature.org) to facilitate co-publication of scholarly work in the field of born digital literary arts. The collaboration marks the confluence of the largest international organization dedicated to electronic literature and the longest continuously running journal of scholarship in the field.

“We are excited about this new collaboration, which will be a boon for the fieldÂ in that it leads the way in the integration of digital and print publishing,” said ELO President Dene Grigar.

With the publicationÂ in SeptemberÂ of John Cayley’sÂ Grammalepsy,Â ELOÂ launches a series with Bloomsbury Press, entitled Electronic Literature, devoted specifically to born digital literary arts. Portions of each book in the series will also be published in advance byÂ electronic book review.Â The co-publication is meant to extend the reach of the ELO series toÂ ebr‘s peer-to-peer network of literary authors who are reading with, and writing for, other authors.

The collaboration will help increase scholarly production across media and among living archives.Â ebrÂ will contribute to the peer reviewÂ ofÂ encyclopedic entries for the Electronic Literature Directory (https://directory.eliterature.org/), a massive online reference. In return ELO will publish selected papers from its annual conference inÂ ebr,Â along with ripostes and blog entries that bring conference themes to a wider public.

The collaboration of these two organizations promises to enrich and extend scholarship in this rapidly evolving field.

Made possible by a major Challenge Grant from the National Endowment for the Humanities, the Maryland Institute for Technology in the Humanities (MITH) is a collaboration among the University of Maryland’s College of Arts and Humanities, Libraries, and Office of Information Technology. Since its founding in 1999, MITH has become internationally recognized as one of the leading centers of its kind, distinguished by the cultural diversity so central to its identity. Located in McKeldin Library at the heart of the campus, MITH is the University’s primary intellectual hub for scholars and practitioners of digital humanities, electronic literature, and cyberculture, as well as the home of the Electronic Literature Organization.

During the trial year 2008, the Electronic Literature Organization is collaborating with the Library of Congress in the selection, archiving, and preservation of several hundred web addresses featuring works of electronic literature (www.archive-it.org). The project, under the direction of ELO President Joseph Tabbi, is at once historical and developmental: each address is to be preserved ‘in perpetuity’ through periodic updates. At the same time, the descriptions, tags, and robust sample of works gathered by the ELO should provide, over time, a profile of the e-lit field.

Founded in 1996, Turbulence (http://turbulence.org) has commissioned over 150 networked art projects and, since 2004, has chronicled emerging network practice via its Networked Performance blog (http://turbulence.org/blog). Turbulence co-presented “Re-Writing” with the ELO at the Boston Cyberarts Festival (2005), and supports the ELO community by sponsoring readings, commissioning e-lit, and blogging new projects and current events.

“Literature on the net/Net Literature” (Litnet) is a subproject of the Cultural Studies Research Centre “Media Upheavals” at the University of Siegen, Germany. The Research Centre examines the prerequisites and structures of the media upheavals at the beginning of the 20th century and in the crossover to the 21st century. Litnet aims at analyzing the ongoing changes of literary communication and aesthetics in programmable and networked media, particularly on the Internet. Under a grant from the Alexander von Humboldt-Foundation, Professor Peter Gendolla and his team provide a database of digital/net literature and research literature (academic books, anthologies and articles) at http://www.litnet.uni-siegen.de/. Litnet archived several thousand sites of e-lit criticism that will be incorporated into the ELO Directory during the year 2008.

Combining elements of graphic design, database programming, and scholarly editing, ebr (www.electronicbookreview.com) has been in continuous publication since 1994. A journal of critical writing produced and published by writers for writers, ebr tracks literature’s becoming electronic. In the Spring of 2008, the ELO awarded ebr a commission to review, tag, and describe incoming selections for the Electronic Literature Directory (http://directory.eliterature.org/).